Last week, Endeavor Insight (the research arm of Endeavor Global) teamed up with the Bill & Melinda Gates Foundation to publish a new report on fostering productive startup communities. The report was authored by Rhett Morris and Lili Török of Endeavor, and I think it is one of the best pieces of empirical work I’ve ever seen on startup communities.

Why such a strong endorsement? Because it helps fill a pretty big information gap for two of the most important principles for building startup communities—networks over hierarchies and entrepreneurs as leaders. At present, the evidence-base is thin, due to the fact that there are no shortcuts to doing this type of work well (building network maps with vital information about the nodes and relationships among them)—it requires painstaking, on-the-ground data collection, which is expensive to do and requires a lot of time (it took Endeavor 18 months to complete the study). Thankfully, Endeavor has done the work in two cities so that we can all learn from it, and more importantly, use to help persuasively state the case for bottom-up community-building.

The research takes a case study approach, studying in extensive detail the startup community networks in Nairobi and Bangalore. To do this, the authors collected information on the individuals and organizations involved in the startup communities in each of these two cities, and mapped the relationships among them. The main result: Bangalore’s startup community is more productive (more high-growth firms and companies at scale) because the network is denser and because the biggest influencers are themselves entrepreneurs; the opposite is true in Nairobi.

The report begins by setting context on the importance of entrepreneurship, by demonstrating that a relatively small number of high-growth companies create most economic value in jobs. This is true in most countries and cities, and as we can see here from the report, is more the case in Bangalore versus Nairobi.

In other words, most businesses don’t produce much in the way of jobs or output, but a small number create a lot of those things, and they drive economic growth. Displayed differently, the report shows that Bangalore’s high-growth business sector is much more productive than is Nairobi’s.

In other words, Bangalore has been better at producing businesses that achieve very high rates of growth and reach a large scale. 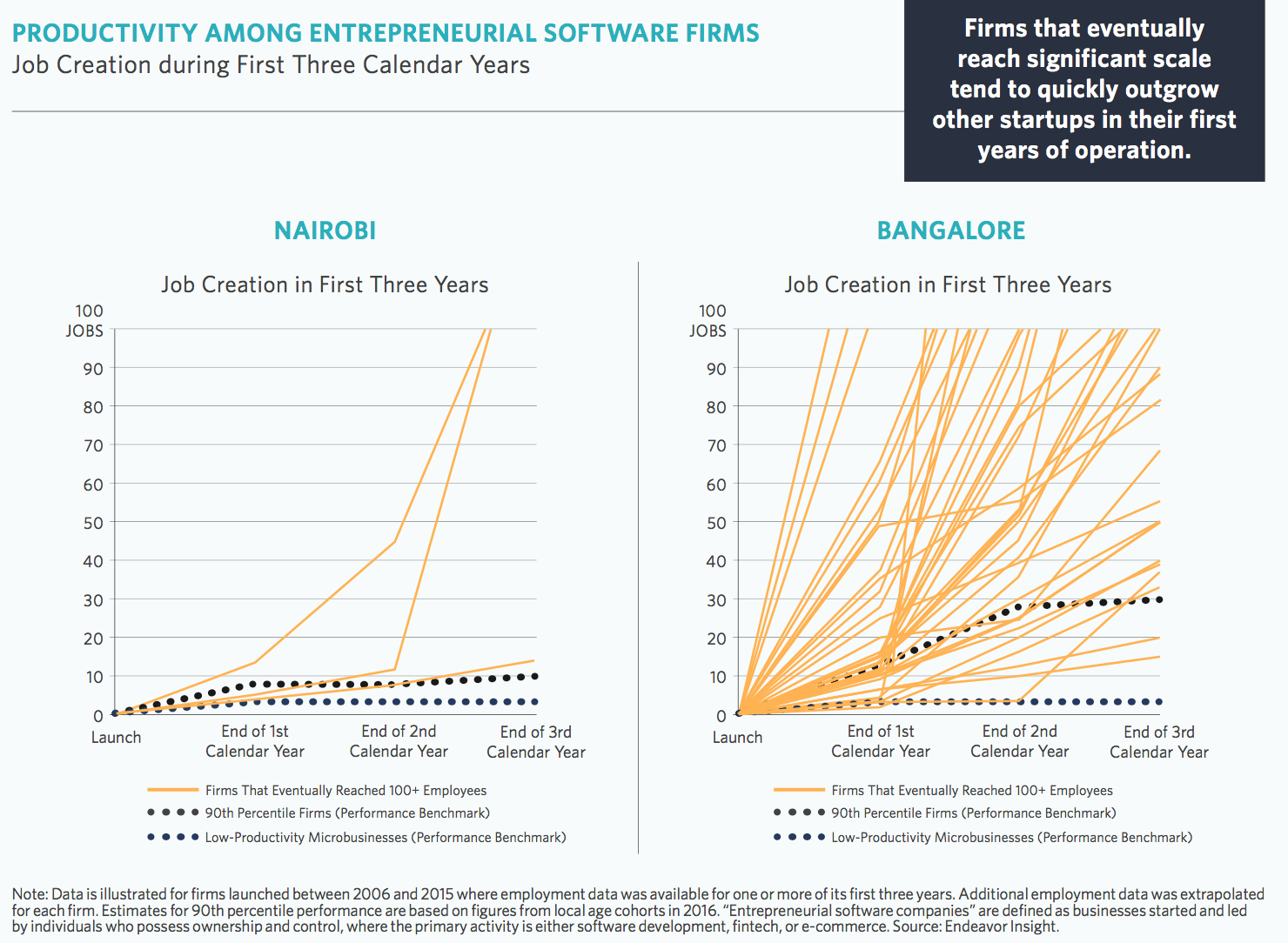 That of course leads to the question of why in one city but not the other? There are a number of factors that could affect this, but central to this study—and two in which I mentioned before are often neglected due to measurement challenges—are networks (relationships) and leadership.

More specifically, Nairobi not only lacks the network density of Bangalore, but it critically lacks the right type of influencers. As the network graphs below make clear, the most influential people in the Bangalore startup community are successful entrepreneurs—those that have guided companies to scale—and non-entrepreneurs are not very influential. In Nairobi, the opposite is true. 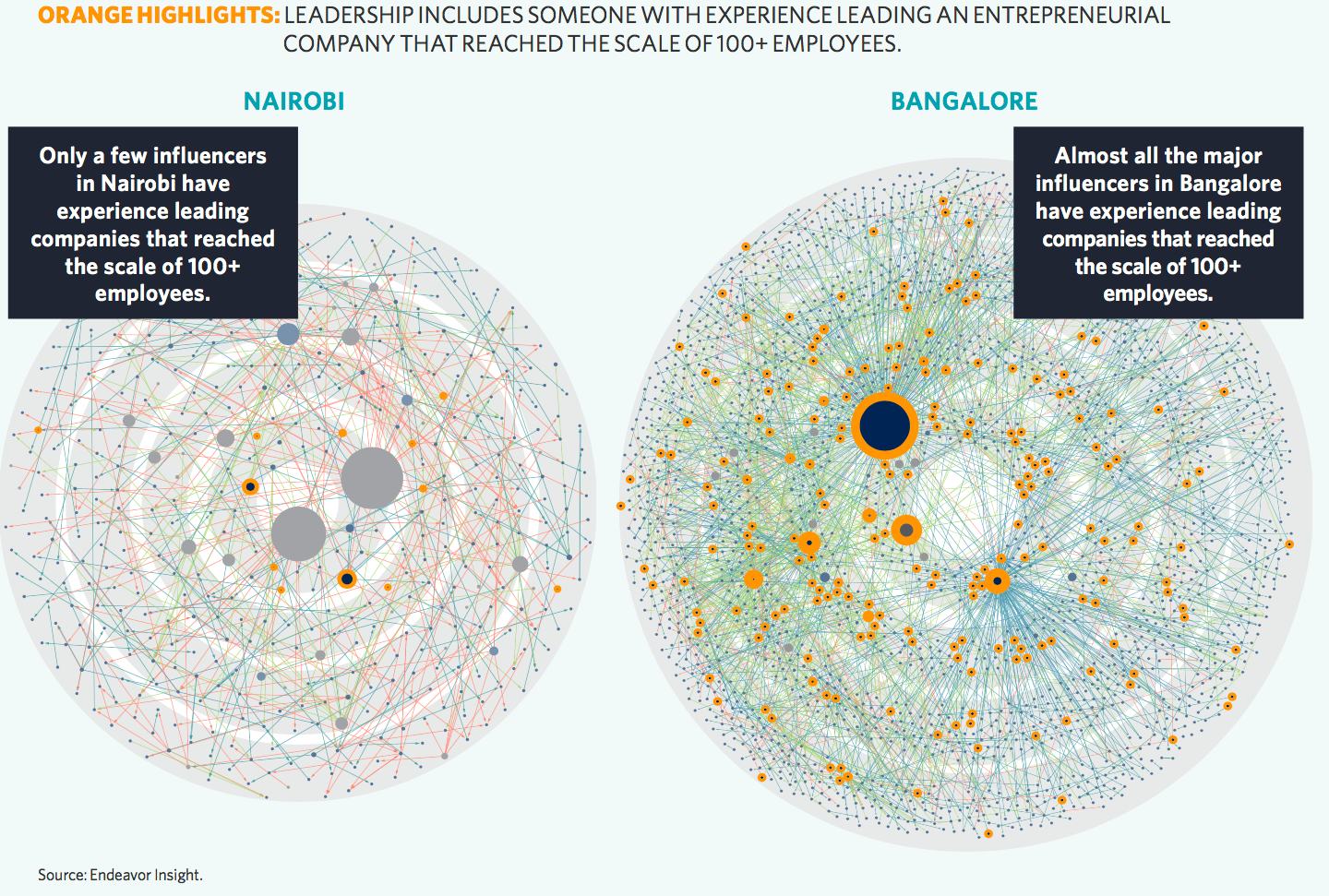 Pretty impressive right? I encourage you all to read the report itself—it’s not too long and it’s written very well (succinct yet weighty). The report summarizes the following five findings, followed by a graph explaining the differences between on bottom-up, network-based approaches to startup community building (recommended) versus top-down ones (not recommended). 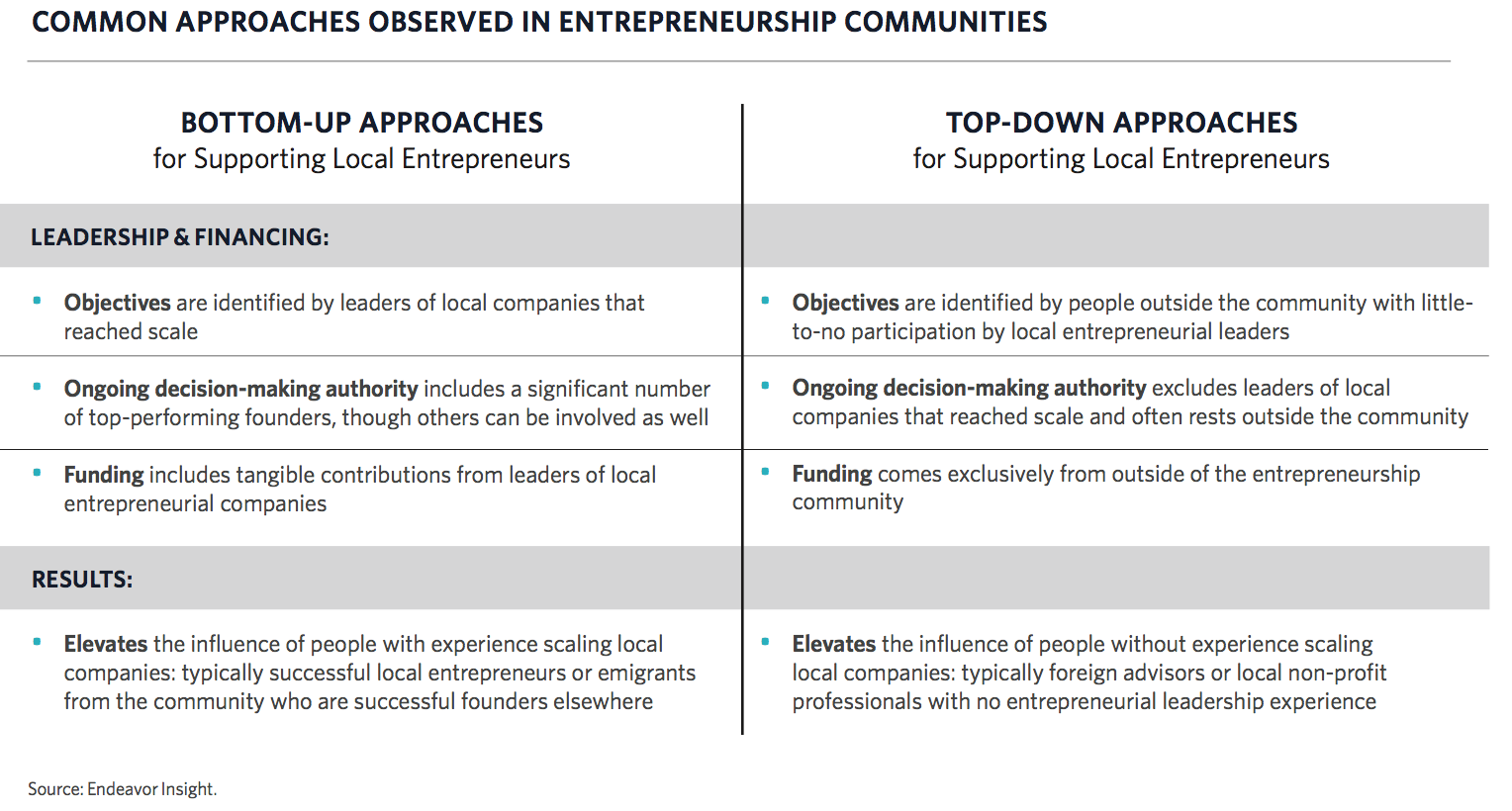 Finally, the report concludes with some recommendations, which I’ll spell out here.

Couldn’t agree with that more. Well done, Rhett, Lili, and your team.