Today I have a major new study out for the Center for American Entrepreneurship, called Rise of the Global Startup City: The New Map of Entrepreneurship and Venture Capital. The report is the culmination of months of work that my co-author, Richard Florida, and I have been toiling away at, and we are really happy to be sharing it today.

What’s new here? We aggregated venture deals and capital invested across more than 300 metropolitan areas that span 60 countries, tabulating levels of activity and changes over time, beginning with the period before the financial crisis (2005-07), the period just after (2010-12), and ending with the most recent period (2015-17). We also break down activity by stages: Pre-VC (angel + seed), Early-Stage VC, Later-Stage VC, and something we call Mega Deals (those above $500M).

To our knowledge, our work on the distribution and dynamics of global venture capital activity at the level of metropolitan areas on such a scale is the first of its kind.

There are a number of key insights from the report, which I’ll summarize in a moment, and there is A LOT of data. We have organized this information in three key ways so that you can easily access our findings:

(I suppose there’s also a fourth. If you want a really short cut on the main findings and implications—particularly for the United States—I have summarized my thoughts in this Twitter thread.)

Overall, we document a significant expansion (massive growth), urbanization (driven by cities), globalization (driven by cities outside the United States), and concentration (driven by a relatively small number of global cities) of venture capital and startup activity in recent years. America’s long-held singular dominance of startup and venture capital activity is being challenged by the rapid ascent of cities in Asia, Europe, and elsewhere. While the United States remains the clear global leader, the rest of the world is gaining ground at an accelerating rate.

I encourage all of you to spend time with the assets we produced, as there is a wealth of information and lots of nuance around global venture capital and startup activity patterns. Plus, as I mentioned, we have a lot of cool data tools for your to play around with. However, here, I’ll provide a brief visual guide of our work. 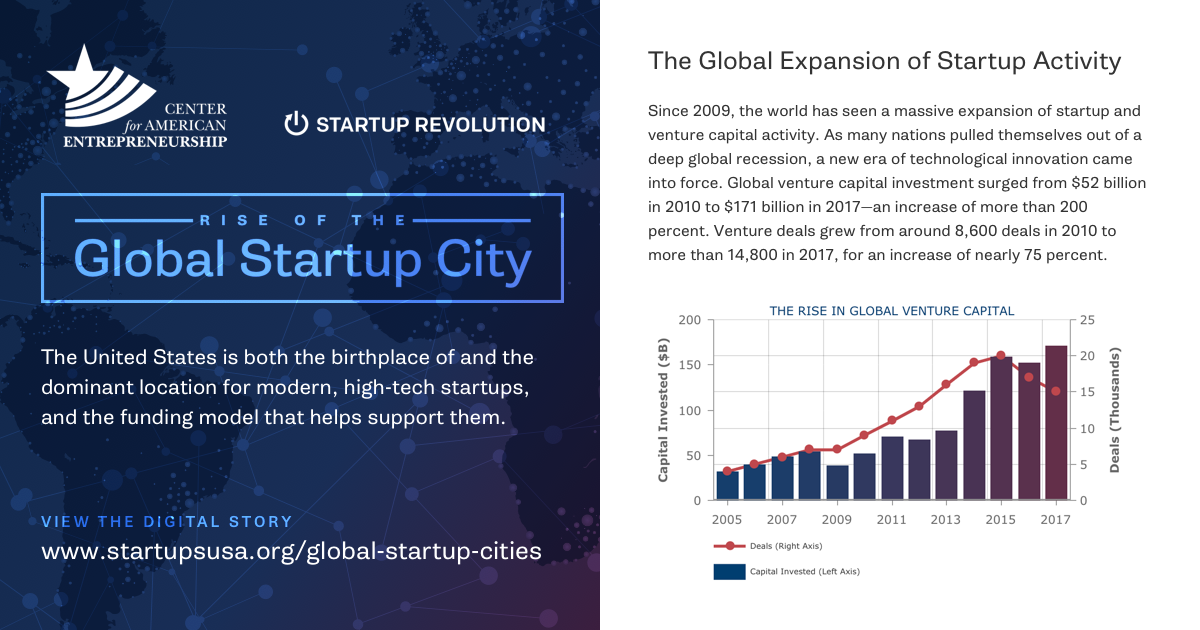 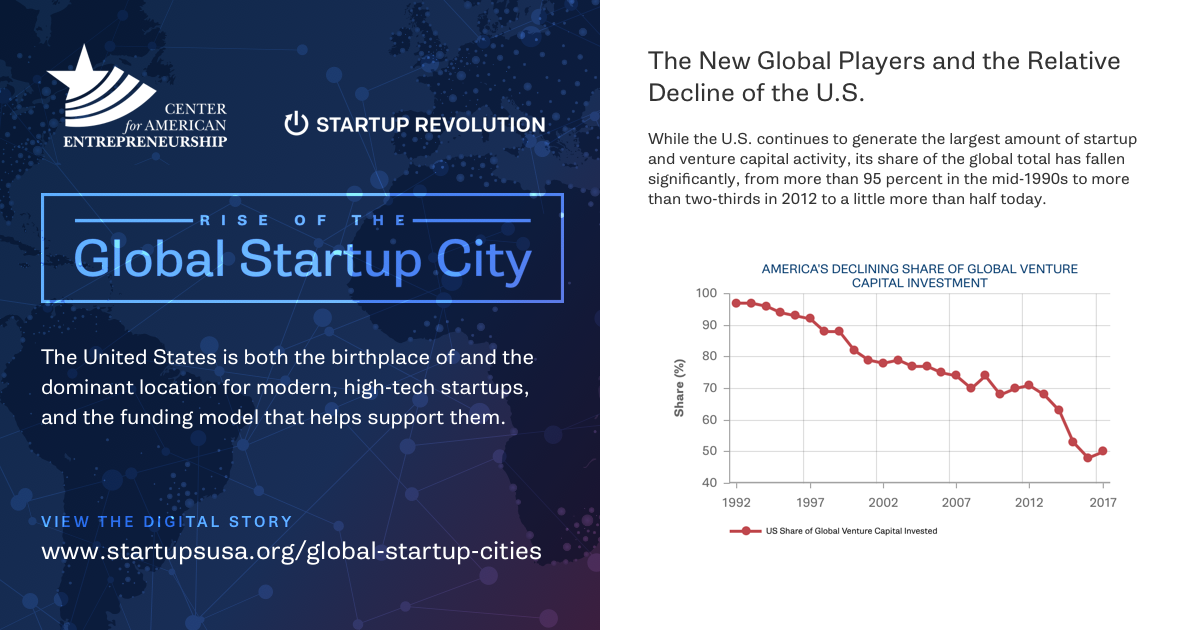 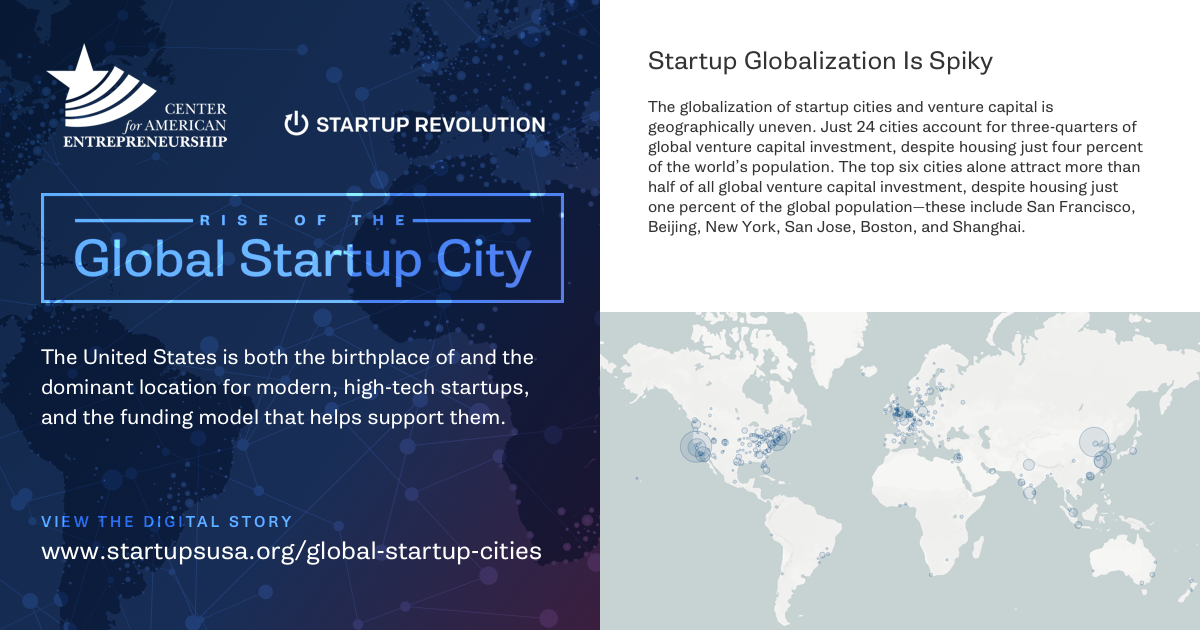 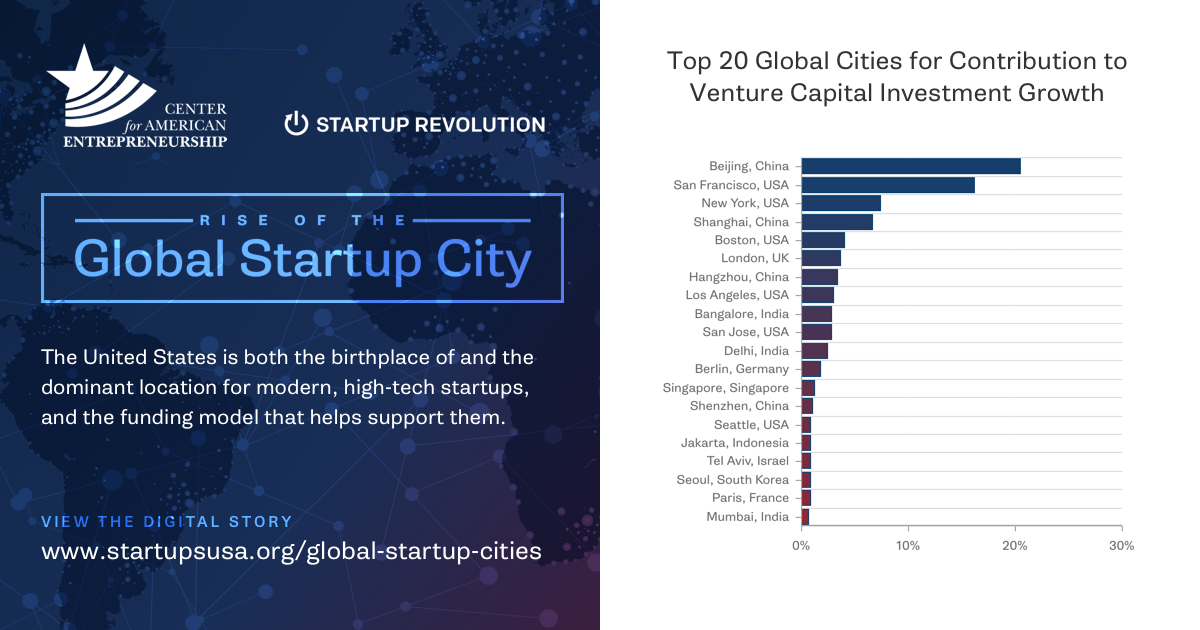 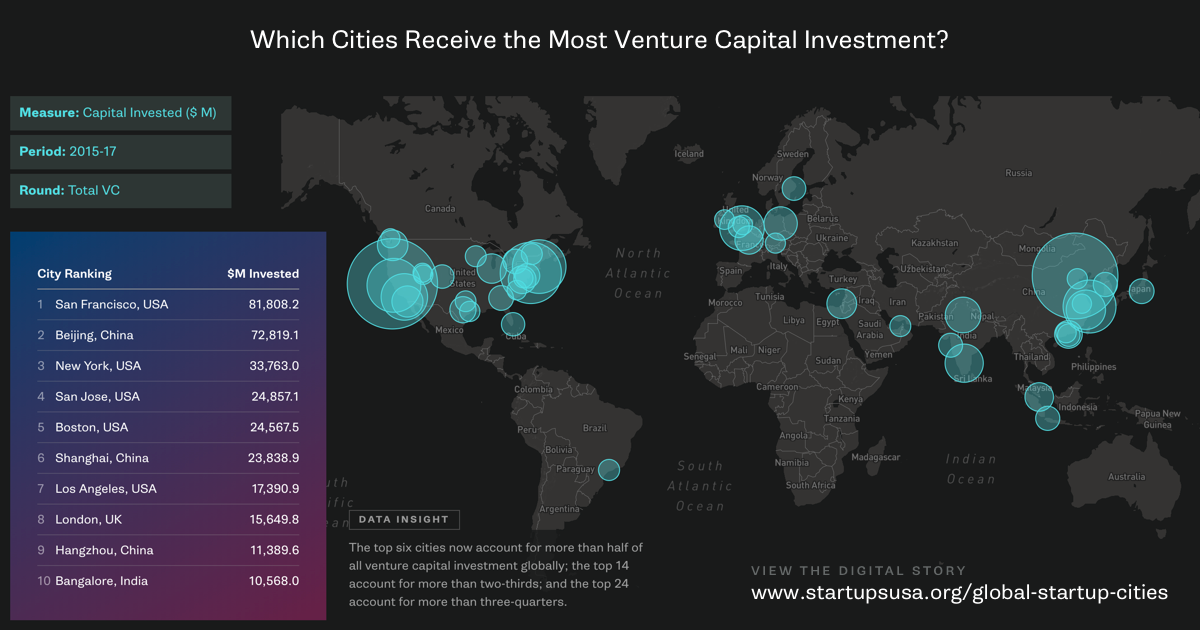 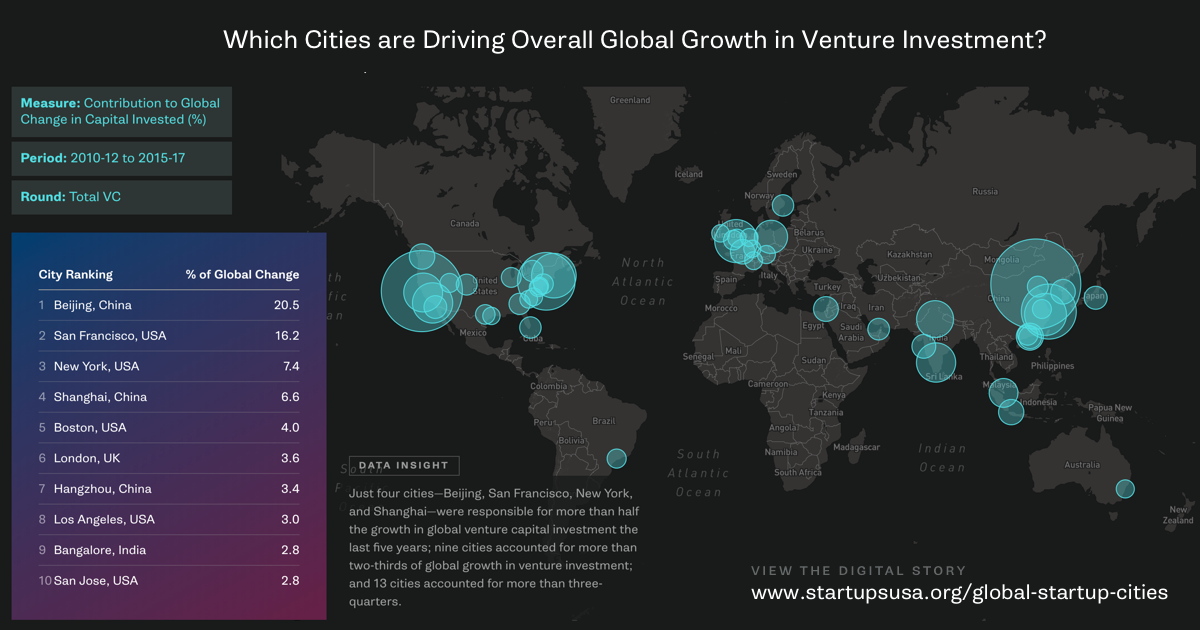 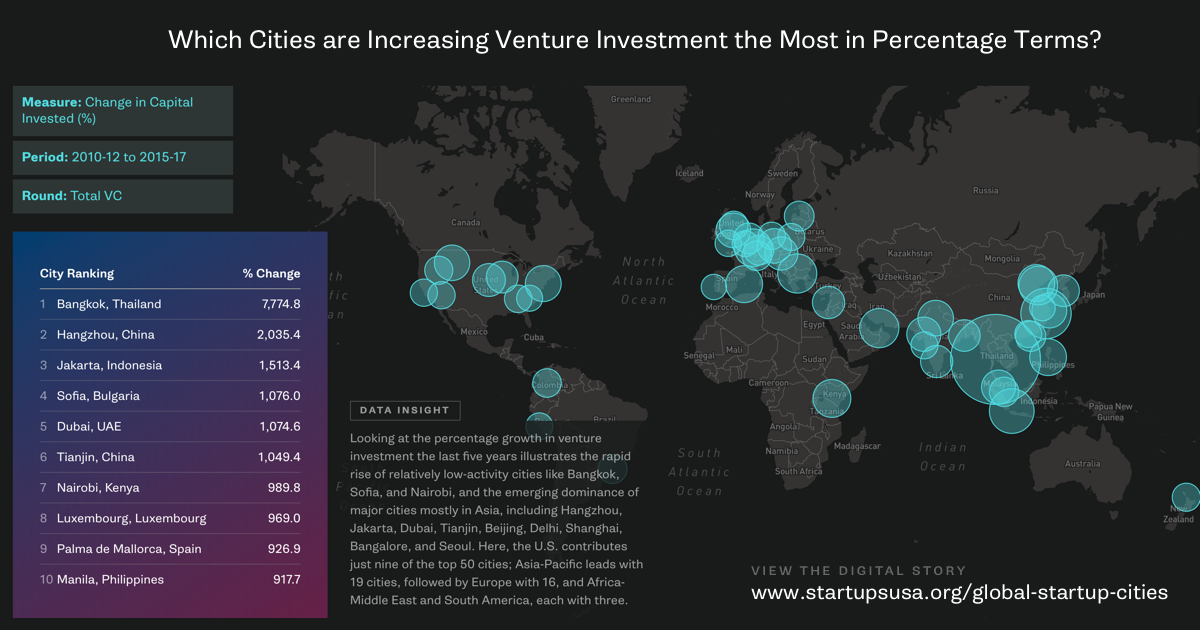 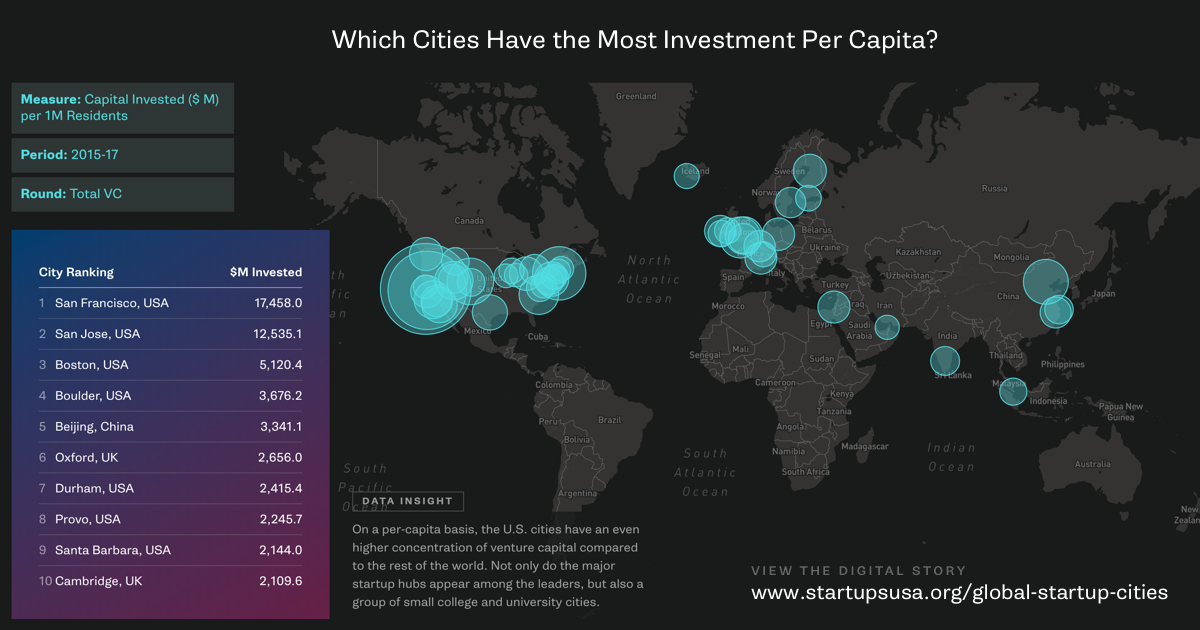