We’ve heard it in startup communities everywhere—while it’s become increasingly likely for high-potential companies to get started most anywhere, the best ones often leave for Silicon Valley. One of the most commonly-cited reasons is that Valley investors require companies to move. That may be true, but perhaps it’s for a much bigger reason—because doing so is beneficial for these companies. But, what do the data say?

Jorge Guzman of Columbia University attempted to answer this question in a research paper published in May: Go West Young Firm: The Value of Entrepreneurial Migration for Startups and Their Founders. He analyzed migration patterns of high-potential companies across the United States and honed-in on those moving to the Bay Area in particular. To make the process more manageable, he looked only at companies incorporated in Delaware—though representing about 4 percent of all firms, they account for half of all publicly listed businesses, over 60 percent of all venture capital financing, and are 50 times more likely to achieve an IPO or be acquired than are non-Delaware firms. Seems like a good batch to look at.

Guzman’s dataset spans companies born between 1988 and 2014, which amounts to nearly half a million firms. He did lots of rigorous statistical work to ensure that he was isolating the impact of migration on a company’s performance, rather than some additional factors, and he cut the data in a number of interesting ways (for example, finding that older founders are less likely to migrate—which makes sense as they are more embedded in existing communities).

So, what did his analysis find?

To begin with, he finds a sizable positive impact from moving on a number of key performance metrics, including equity growth (IPO or acquisition), intellectual property, and raising venture financings—and that these effects are the strongest for companies that move to Silicon Valley. 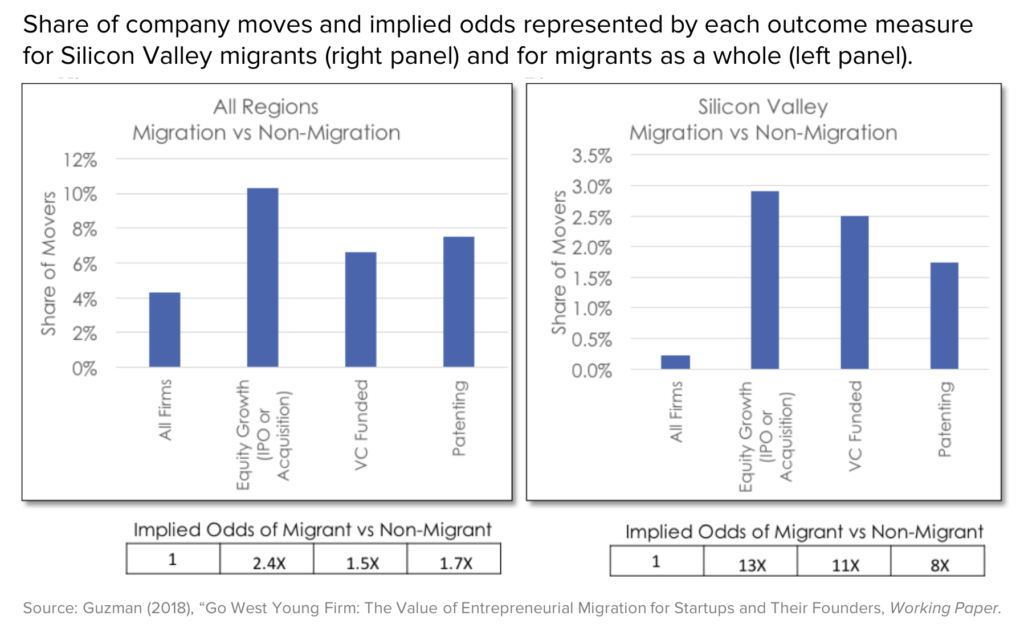 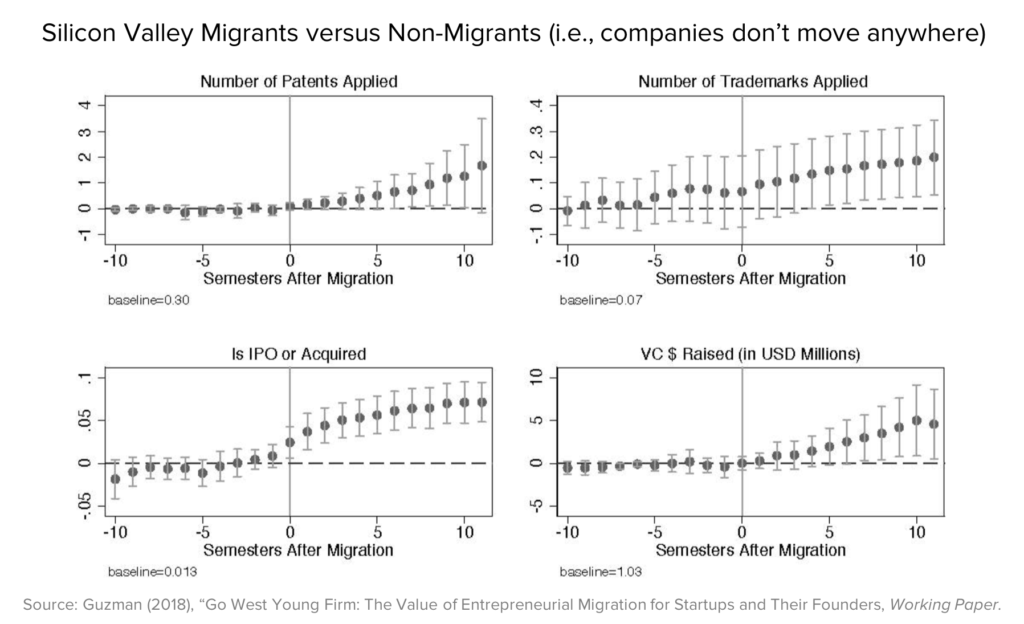 Collectively, we see that although fewer than 0.25 percent of the 500,000 companies studied moved to Silicon Valley, those that did were more than 13 times more likely to achieve a successful exit, 11 times more likely to raise venture capital, and 8 times for likely to secure intellectual property rights, compared with companies that did not move. We also see positive effects for the more than 4 percent of companies overall the move, but the impact is much lower.

Furthermore, Guzman finds that not only are companies that move higher-performers to begin with, but controlling for pre-move firm-quality, he finds a significant impact from the move itself—in other words, Silicon Valley may in fact be siphoning some of the best entrepreneurial talent from other places and it’s because doing so helps these companies succeed. In fact, Guzman finds no measurable benefits to moving for companies with lower pre-move quality.

Now, before you startup community leaders in other places feel too defeated, there’s a potential silver lining here—there is suggestive though not definitive evidence in Guzman’s work that the advantage of moving to Silicon Valley is reducing over time. As Guzman notes, and as can be seen in the figures below, while the quality of migrants to Silicon Valley has remained constant over time, the impact of moving there has not:

“The patterns before and after the dot-com bust are striking… While there was a large benefit of moving to Silicon Valley during the boom years, this benefit becomes negligible in the bust years.”

The one drawback here is that in order to conduct this analysis, Guzman looked at a shorter-time period: he only included moves between 1996 and 2006. That means we don’t know if migrations to Silicon Valley in recent years have also been reduced, or if this was isolated to just the half-decade or so following the Dotcom boom-bust (a unique period in time). That’s a major limitation to the study and one that has me uncertain about what to take away from this, especially given that startup and venture capital activity have been concentrating in the Bay Area considerably in recent years.

For me, the major takeaway as it relates to startup communities is this: a robust entrepreneurial environment provides significant value to high-impact startups, which is something every city should want—there are significant economic spillover benefits to such activity in a city. The example of Silicon Valley can be thought of as an upper bound for the value improvements that could occur for startups in a city with a vibrant external environment for founders. As the data demonstrated, startups benefit from moves broadly, and while the study didn’t go into detail about where those places are, the clear signal is that migrating founders believe that being in some places is more beneficial than others—the evidence here supports that belief.